Hosting a US Congressional debate during a pandemic is ambitious enough – it would be crazy to attempt to air the debate live on over a dozen different independent local access stations simultaneously, right? The team at Milford TV aimed high with a recent production, and ended up exceeding expectations.

Access stations in Massachusetts have been forced to operate differently throughout the COVID-19 crisis, with many stations using RTMP streaming for the first time. ​R​eal-​T​ime Messaging ​P​rotocol (or “RTMP” for short) is a method to stream video and audio over the internet. This stream can originate from a variety of broadcast software and is then picked up and distributed to your audience by services such as YouTube, Facebook, or modern broadcast servers.

Many stations have had the capacity to accept RTMP streams built into their broadcast servers for a few years but never had a need to use it, with reliable copper or fiber lines working for regular live broadcasts. The COVID crisis forced many stations to operate fully remotely for at least a time, making this capacity necessary to continue broadcasting. Milford TV was able to host a debate featuring the nine candidates running for Massachusetts’ 4th Congressional District, and make an RTMP stream available to any station interested in airing the program live.

Milford TV’s Executive Director Liz Harkins strategized with the local Democratic Town Committee to solicit questions from the community using a Google Form that was promoted on social media platforms and the station’s community bulletin board. Dozens of questions for the candidates quickly rolled in. Milford TV News & Sports Director Tim Caouette was selected to host and moderate the debate. The station hosted the debate virtually to comply with social distancing guidelines and the nine candidates “called in” from their homes. 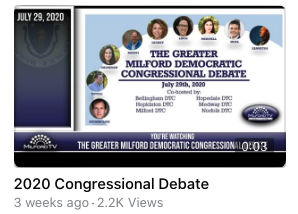 The station reached out to other local access stations in advance to see if they would be interested in carrying the debate live, and was surprised by the positive response: 13 stations, including many Milford TV had never collaborated or met with in the past, were eager to partner to air the program live.

Milford TV Technical Supervisor Daniel Harlow designed and operated the technology for the production. Harlow worked with each station’s individual needs to assist in getting the RTMP stream on-air. Stations used diverse broadcast servers including TelVue, Castus, Leightronix, and Tightrope, with ages ranging from 20 years old to brand new.

Harlow configured their Castus cloud service to allow any station to pull the RTMP connection without any additional local network configuration. Harlow says, “Milford TV has been working for the last year and a half to make sharing a live broadcast, town to town, possible. We had a feeling this feature could make collaborating with other stations to broadcast and share important information live to the masses reliable and easy.” A few stations with legacy broadcast servers resorted to using a laptop to “watch” to the live broadcast online, and mirrored an HDMI output on that device (converted to an analog BNC connection) to get the feed on-air.

The station used the platform Streamyard to host the debate, allowing for more customization in switching and graphics versus the simple grid and speaker views that other platforms display. This functionality allowed Harlow to make the program look more like the studio productions we’re used to, with upstream and downstream keys making the program more visually appealing. Additionally, Milford TV subscribes to a Castus service that allowed for live closed captions, which added even more access without increased labor. 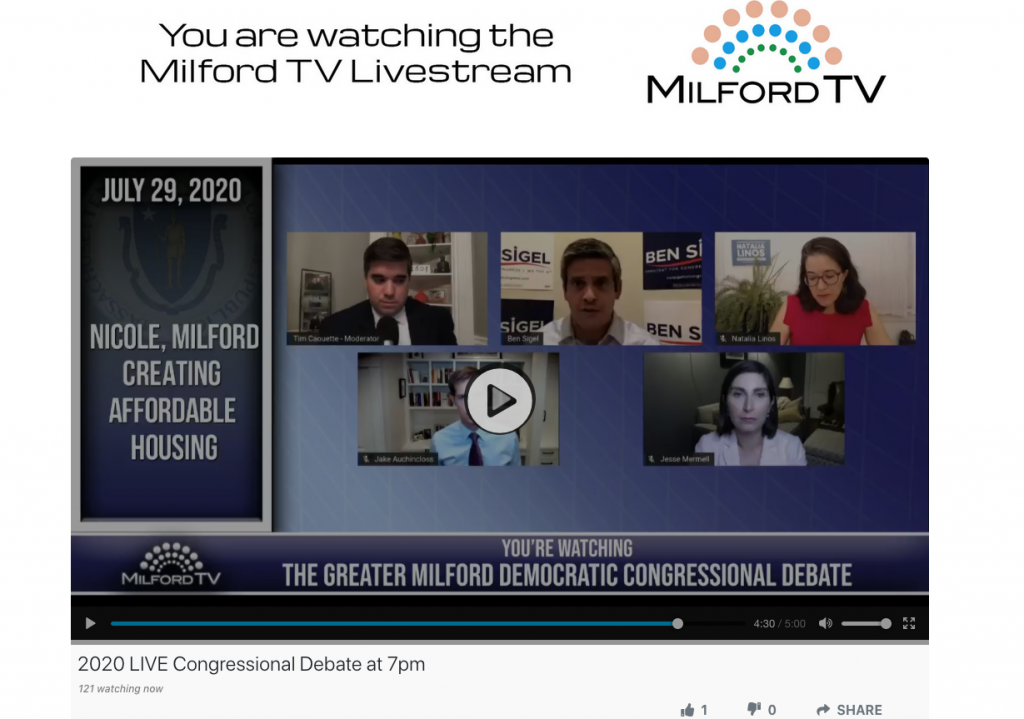 Every powerful platform comes with limitations: In this case, graphics layers couldn’t be transformed once loaded into the platform, and some of the candidates’ faces were covered by lower third graphics. Harlow solved this easily and elegantly by putting the video from Streamyard in a squeezeback, and putting debate information, branding graphics, and lower third titles in the newly gained real estate.

On the day of the debate, Milford TV went “live” on the platform with a slate and some music a half hour before the program was scheduled to begin so that the remote stations could test the video and audio they were receiving. Once the 13 remote stations were ready to go, the program went live. Over 10,000 viewers tuned in online on the Milford TV’s Facebook page and website (hosted by Castus) in addition to the thousands of on-air viewers that caught the program live in their various communities.

The debate was received very well by the community, and many community members contacted Milford TV directly to thank them for the program. Harlow took a risk by giving out his personal cell phone number to the 13 stations they partnered with, but rather than panic phone calls he instead received texts of gratitude and excitement. Every single station has asked to be included in future live broadcasts, and Milford TV hopes to expand their homegrown local media consortium with every event they cover.

Questions and comments regarding this event can be directed to Milford TV Executive Director Liz Harkins and Technical Supervisor Daniel Harlow.

Is your organization doing something innovative or interesting? We want to hear about it! Click here to contact MassAccess Board Member Brendon Holland.